Captain Robert Falcon Scott was born in Devonport in 1868. At the age of thirteen he began his naval career as a naval cadet on the training ship Britannia and served on a number of Royal Navy ships in the 1880s and 1890s. A promising but conventional naval career lay ahead of him. However, Scott was forced to reassess his ambitions with the sudden death of his father and brother meant that he became sole support for his family.

Around this time Sir Clements Markham was looking for a leader for the forthcoming exploration to Antarctica. Scott had attracted Markham’s attention on a number of occasions during his early career. Scott had considerable experience under sail, had learnt about surveying, electricity and magnetism as a Torpedo lieutenant and had a great interest in and aptitude for scientific work. Following glowing recommendations from previous captains and the naval hierarchy, Scott was appointed captain of the Discovery expedition in June 1900. 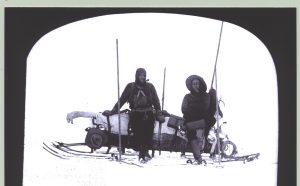 During the British National Antarctic Expedition the RRS Discovery was locked in ice for 2 years.

The expedition was deemed a great success, achieving both scientific and exploration success.Scientific results covered extensive ground included important biological, zoological and geological findings. For example, Scott’s western journey which led to the discovery of the Polar Plateau, the exploration of King Edward VII land and the discovery of the first Emperor penguin colony. The expedition did not make a serious attempt on the South Pole itself, however would travel the furthest south than anybody before them, reaching a latitude of 82° 17′ S, about 530 miles (850 km) from the pole.

Scott returned to Britain a national hero and began planning for his next expedition south. This came in 1910 during the British Antarctic Expedition on board the Terra Nova. As part of a five man polar party he reached the South Pole on 18 January 1912, just 11 days after a Norwegian party led by Roald Amundsen. Harsh conditions during this return journey led to the death of the whole party, with his last diary entry found 29 March 1912.